How to Foster a Diverse and Inclusive Brokerage

WPP broker-owner Kevin Mullin was recently featured in the Autumn 2018 issue of Washington REALTORS Magazine for the brokerages efforts to increase diversity in their managers, agents, and staff.

This article was written by Bridget McCrea and originally published in the Autumn 2018 Issue of Washington REALTORS Magazine. 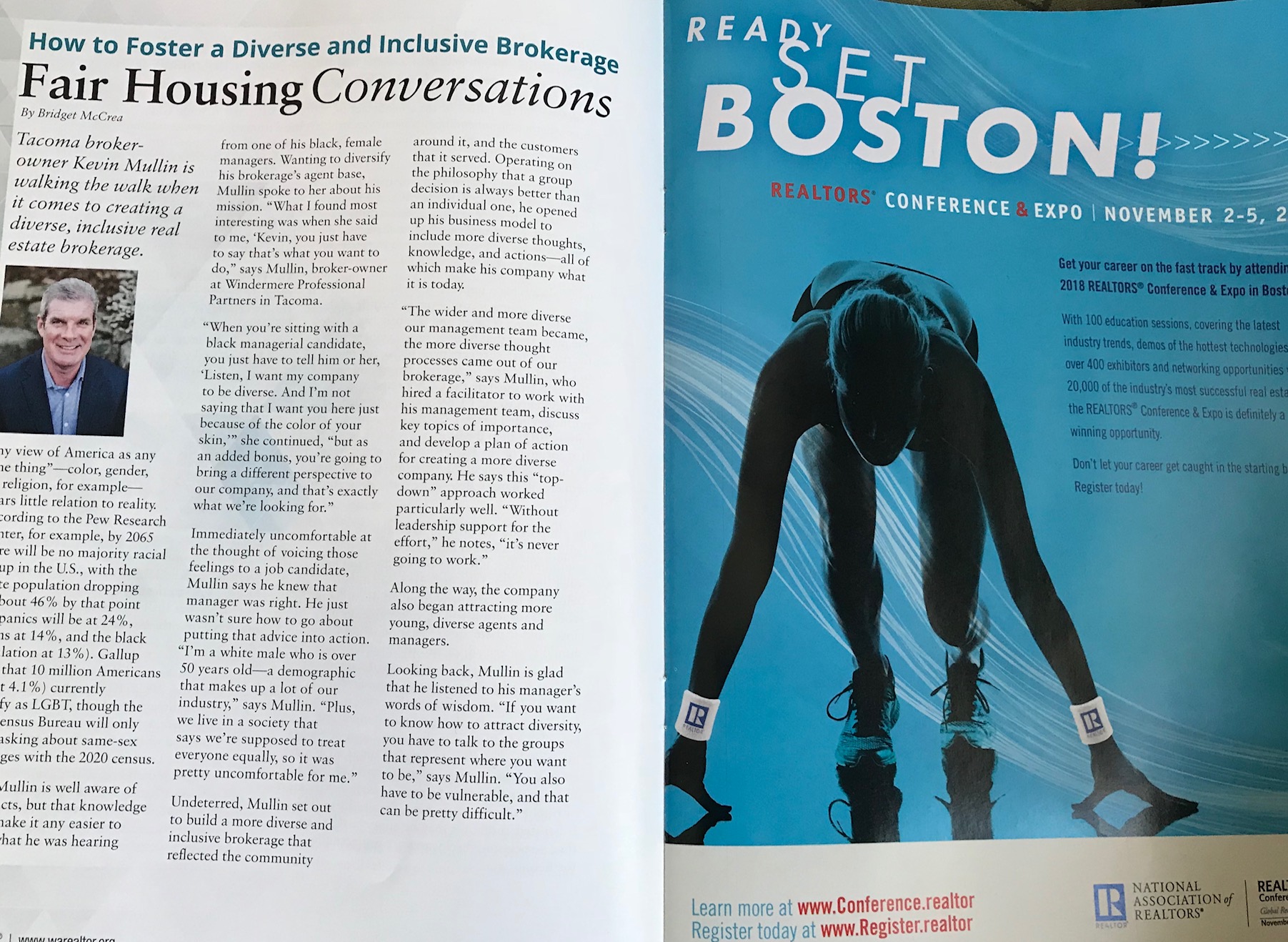 Any view of America as any "one thing"- color, gender, or religion, for example- bears little relation to reality. According to the Pew Research Center, for example, by 2065 there will be no majority racial group in the U.S., with the white population dropping to about 46% by that point (Hispanics will be at 24%, Asians at 14%, and the black population at 13%). Gallup found that 10 million Americans (about 4.1%) currently identify as LGBT, though the U.S. Census Bureau will only begin asking about same-sex marriages with the 2020 census.

Kevin Mullin is well aware of these facts, but that knowledge didn't make it any easier to digest what he was hearing from one of his black, female managers. Wanting to diversify his brokerage's agent base, Mullin spoke to her about his mission. "What I found most interesting was when she said to me, 'Kevin, you just have to say that's what you want to do,'" says Mullin, broker-owner at Windermere Professional Partners in Tacoma.

"When you're sitting with a black managerial candidate, you just have to tell him or her, 'Listen, I want my company to be diverse. And I'm not saying that I want you here just because of the color of your skin,'" she continued, "but as an added bonus, you're going to bring a completely different perspective to our company, and that's exactly what we're looking for."

Immediately uncomfortable at the thought of voicing those feelings to a job candidate, Mullin says he knew that manager was right. He just wasn't sure how to go about putting that advice into action. "I'm a white male who is over 50 years old- a demographic that makes up a lot of our industry," says Mullin. "Plus, we live in a society that says we're supposed to treat everyone equally, so it was pretty uncomfortable for me."

Undeterred, Mullin set out to build a more diverse and inclusive brokerage that reflected the community around it, and the customers that it served. Operating on the philosophy that a group decision is always better than an individual one, he opened up his business model to include more diverse thoughts, knowledge, and actions- all of which makes his company what it is today.

"The wider and more diverse our management team became, the more diverse thought provesses came out of our brokerage," says Mullin, who hired a facilitator to work with his management team, discuss key topics of importance, and develop a plan of action for creating a more diverse company. He says this "top-down" approach worked particularly well. "Without leadership support for the effort," he notes, "it's never going to work."

Looking back, Mullin is glad that he listened to his manager's words of wisdom. "If you want to know how to attract diversity, you have to talk to the groups that represent where you want to be," says Mullin. "You also have to be vulnerable, and that can be pretty difficult."

This article was written by Bridget McCrea and originally published in the Autumn 2018 Issue of Washington REALTORS Magazine.